Robert van Aanholt: A ray of sunshine on the bus 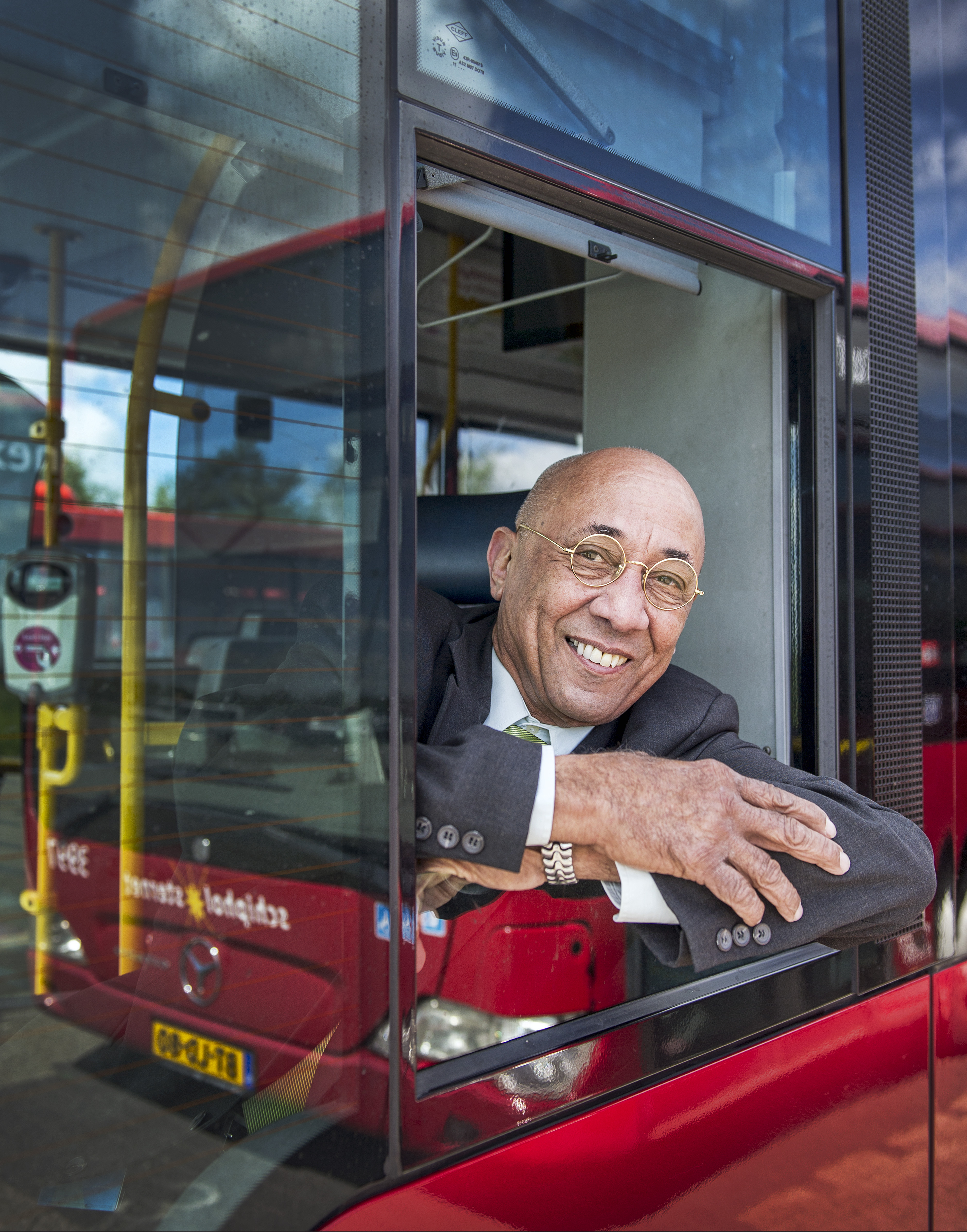 Who are you?
My name is Robert and I am who I am! I'm a very sociable person. But I can be quite serious if I have to be. I can have in-depth conversations with people. My friends know me as a sociable man who likes to have a laugh, especially with other people. I love life and I think it shows.

One of my passengers recently told me I was in the wrong job. If I worked in a big company I would, for example, have been good at entertaining the staff, which would make them work harder! When I worked in hospitality (I was a maître d' at a very young age), that's exactly what I did. I motivated the girls in the kitchen by making them laugh. When I worked on board ship I also really enjoyed being in company, and I helped my colleagues make up the beds or pacify difficult passengers, for example. Humour gets you a long way! I learned to deal with disappointment at an early age. You mustn't dwell on things for too long. It's best to put negative situations and thoughts behind you, then you can get on with the good, positive things.

And I must tell you too that I really enjoy female company. I grew up with four very sociable sisters. I've noticed that most of the in-depth conversations I have are with women. I don't often have those types of conversations with men.

What do you do now?
I've worked as a bus driver for Connexxion in the Schiphol area for 23 years. So I know Schiphol pretty well. But I also drive to Lisse, Nieuw Vennep, Hoofddorp and Uithoorn. It's great driving the number 172 bus through the centre of Amsterdam in the summer. There's so much to see. But, I must say, I do sometimes wish I had a day off when I'm driving that route.

Before I became a bus driver I worked in hospitality. I worked in restaurants in Amsterdam and also in big hotels. In Curaçao I worked almost everywhere, mainly with Pierre Spijkermans, who owned a number of restaurants over there. I progressed from maître d' to manager. Eventually, Spijkermans left everything to me. In Amsterdam, I worked with Joop Braakhekke, among others.

After hospitality, I worked in security, including at the Tropenmuseum. I pretty soon realised that security didn't offer me enough of a challenge. I spent too much time in an office and I missed the contact with people.

As security manager at Drijfhout, I saw buses going past my window every day. That's what made me decide to apply for a job as a bus driver. Once I'd got my HGV licence, I could start work. And I loved it from the very start. I have a huge amount of freedom. Nobody's constantly telling me what to do and I have a lot of responsibility. It suits me perfectly. I'm not very keen on hierarchies within organisations. I prefer to be my own boss.

Morning ritual
I try to make the most of every day. When I get up in the morning, I'm already looking forward to the day. I set my alarm very early, so I have enough time to get ready. I'm always full of energy and I'm never tired when I wake up. In the evening, I get everything ready for the next day. I like to make a good impression, so I make sure my clothes are smart and properly ironed.

What does Schiphol mean to you?
For me, Schiphol is a city. A lot happens with people, intentionally and otherwise. People come and go. I know a fair number of people in the area and that has an affect on me. I often recognise people and I remember their stories, both the positive and the negative. I'm a good listener. Perhaps that's why people tell me things.

My funniest experiences
Head office once asked me to drive a bus in the Amersfoort area. But I didn't know the route at all! So I had to rely on the passengers on the bus. The first part of the journey was okay because a gentleman gave me directions. But after this gentleman had reached his destination, I of course immediately went the wrong way. I didn't know where I was going. Luckily, a lovely lady on the bus pointed me in the right direction for the remainder of the journey. So, you see, if you remain positive, it always works out in the end.

Another interesting experience I had was when, one sunny day, I was driving the bus wearing my white salsa hat. I greeted everyone by touching my hat. I did the same thing to a number of car drivers while I was waiting at a red light. Until one particular BMW just carried on driving round the bus. Later on that day, I got a call from head office. Someone had complained about me because they thought I wasn't a proper chauffeur! But there aren't many chauffeurs who drive with a hat on and say hello to everyone.

It's important to be able to be yourself and show others who you are. But I notice every day how strange a lot of people find this. Lots of people just think I'm a bit odd!

Motto
I've done a lot of things in my life. I've seen a lot of different places in the world and I've worked with a lot of different people. I've also had a fair number of relationships that I've learned a lot from. My motto is “Look for the child inside you”. Everyone's so busy rushing around all over the place. But where does it get you? Always cherish the child inside you. That way, you'll be happier in yourself and a happier person to be with too!